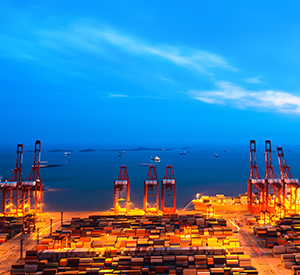 First I would like to say ‘Hello!’ to all of the TradeLane readers, this is my first post here but will certainly not be the last. I joined Tradewin as Principal in Asia just recently and am really excited to be here!

When I travel to the US or the EU I am often asked to provide some thoughts on managing trade compliance in Asia. This is a bit difficult thing to do because there are of course an awful lot of countries in Asia (anywhere between 25-75 depending on what you count as ‘Asia’). And of course each country has its own unique set of trade regulations and practices that may or may not be similar to what exist elsewhere in the region or in the world.  Still, if we limit ‘Asia’ to the larger trading countries (say, China, Hong Kong, Indonesia, Japan, Korea, Malaysia, Philippines, Singapore, Taiwan, Thailand, and Vietnam), and exclude India, there are some general points that can be made that describe the environment as we experience it.

First, the countries listed above can definitely be divided into at least two different sets.  One set will be those countries with quite mature trade regulations that don’t change all that often; with standardized processes; and with regular audit or other compliance verification programs. These would be roughly, and there could be some dispute here amongst trade professionals: Hong Kong, Japan, Korea, and Singapore. The other set would be those countries where trade regulations are changing rapidly and often dramatically; where regulation and actual practice diverge significantly; where corruption is still an issue for Customs; and where compliance expectations and processes are not well defined. This would roughly consist of China, Indonesia, Philippines, Thailand, and Vietnam. Malaysia and Taiwan could be said to occupy a kind of middle ground between the two extremes. 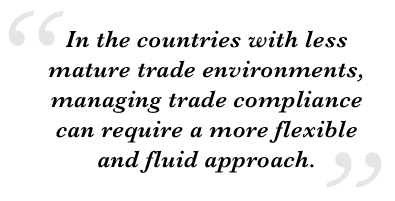 Managing trade compliance in the first set, largely consists of knowing the regulations and putting in controls and procedures to abide by their specific terms; applying for rulings when necessary; enrolling in various customs facilitation programs; and preparing responsibly for scheduled audits. Quite similar to what may be done in the US or EU.

In the second set it can be quite a different game altogether. In the countries with less mature trade environments managing trade compliance can require a more flexible and fluid approach.

For instance, while complying with the regulations is always at the root of trade compliance, in many of these countries the regulations are deliberately written in a non-specific fashion that allows considerable room for interpretation by the local officials. Understanding a regulation is only the start of a process that continues through understanding how the regulation is actually implemented in practice; whether or not it is ever enforced and why (not); whether the interpretation is different for foreign companies as opposed to local companies; as well as several other factors.

Only through understanding each of these factors can it be determined how best to design procedures and controls that will result in compliance with the regulation but also allow the business to operate in an efficient and competitive manner.